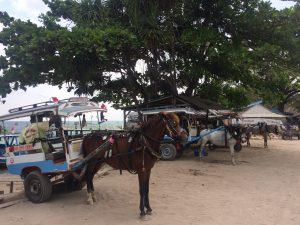 The Gili Isles consist of 3 beautiful coral islands splashing a slice of paradise off the north coast of Lombok, now easily accessible by fast-boat from Bali, Indonesia’s gateway for tourism. These once very peaceful and idyllic islands are now the location for Indonesia’s liveliest and hottest party scene.

Gili Trawangan is the largest of the 3, and home to beer pong, live music and Full Moon parties, and is perhaps a bit overrun with gap year students on a mission to have a taste of hedonistic fun in paradise. Gili Meno is nicknamed the Honeymoon Island, is very charming and peaceful, and favoured by couples. Whereas laid back Gili Air is something in between, still clinging fiercely onto the charm the islands used to ooze, but keen to shake its sandy booty every once in a while. 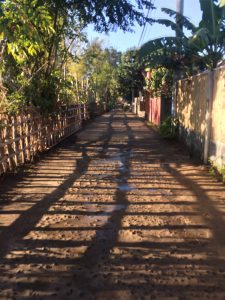 I had previously arrived at Gili T some 10 years ago, on the precarious local ferry, which cost only a few pounds, but took almost a full day of slow and laborious travel. But those days are long gone now as affordable speedboats offer a super fast service from Padang Bai. Back then the island was barely touched by tourism and there was merely a small strip of 4 or 5 bamboo shack beach bars, a few dusty shops and some very basic accommodation, filled with a small flock of scruffy hippies high on the island’s still famous mushroom delicacies. The reefs at that time were near pristine and the island trundled along lazily at the slow village pace befitting an island devoid of any transport other than the occasional bicycle or pony cart. Children played in the dusty streets as old men sat mending their fishing nets in the morning sunshine.

Sadly those days are inevitably gone as mass tourism has cascaded in, bringing with it the shrieking squawks from public school graduates, never ending construction and the heavy bass from house music. But beneath all the chaos,, the Gillis somehow still manage to cling fiercely to an undeniable charm and special magic that is so very difficult to find elsewhere.

To get to the islands nowadays, is simply to buy a ticket from one of the many hundreds of tour operators packing the street walks of Kuta Bali, the entry point for the majority of tourists stepping off the plane in Denpasar. We shopped around and found vastly differing prices, being quoted everything from 400k IDR to 1.3 million. There are several different tour operators, each with varying standards and conditions of fast-boat. We opted for the cheapest, and possibly one of the best in terms of value for money and party atmosphere, Wahana Fastboat. The 400k IDR included an open return ticket including hotel pickup and transfer by minibus to the main port at Padangbai, around 1.5 hours drive away. We were picked up on time along with 2 other travellers, a crazy travelling Scot, Greg, and a freshly graduated English student we nicknamed Handsome Jim – for obvious reasons.

Our Brit-pop bus hurtled us swiftly to the port of Padang Bai, which proved to be a chaotic mess of backpackers and students checking in to collect their particular coloured sticker to identify their particular boat. Hawkers touting the usual were everywhere – crisps, fruit and cold beers were thrust under our noses in a relentless hopeful stream, mostly accompanied by wide toothy grins. So, keen to maintain our reputation we felt obliged to sink a few Bintangs and get into the party spirit. Let loose on the top deck with music belting out the massive speakers, we sunk a fair few more and by the time we arrived on the pure white sands of Trawangan, burnt to a crisp, and soaked to the skin, we fairly bounced and rolled off the boat.

The boats go direct to Trawangan, then on to Meno, Air and Lombok, before returning back to Padang Bai. It seems that everyone on Gillis now use www.booking.com as their choice of booking app, but although we hadn’t booked online we found it easy enough to get a room, as hawkers line the jetty awaiting fresh blood to catch. However we reckon in high season it would be worth booking ahead, and certainly, we found it much more tricky to find accommodation on Gili Air.

On both Trawangan and Air there are numerous ATMs and money changers (we never visited Meno so cannot confirm), long gone are the days of money runs to Bali. However bare in mind the exchange

rate given by money changers on the island is poorer than on the mainland.

Most of Trawangan’s bars and restaurants are on the beachfront, offering Bintang, Radler (a 2% Bintang with ‘lemon’) and various cocktails made with either local spirits or imports. The local wine tends to be sickly sweet, gloopy and utterly rank. Also be wary of local spirits, as often these are improperly made in a makeshift distillery, and can still contain traces of methanol, which can make you extremely ill and in some instances, fatal. Buy branded if you’re unsure.

And if none of that floats your boat, there’s always the suspiciously dodgy marijuana and magic mushroom sellers whispering manically and offering to ‘try before you buy’ – dabble at your own risk there, we abstained so can’t advise on the quality, but

they seemed sketchy as fuck to me.

If you’re on a budget, the fish market in the main square is where to head for for a tasty BBQ- choose your fresh tuna/snapper/chicken or tofu/tempe, and load up on free salad and rice, for 20k/skewer. Always busy with a great atmosphere. Or if you take a wander down the sandy backstreets away from the beach you can find some hidden treasures selling local fare, typically Nasi/Mie Goreng for around 25k per meal.

The low budget homestays are also to be found in the quaint backstreets of the village, where local kids play around in the streets, and chickens peck and scrape in the dust. I found a lovely and bustling little home

stay called Gili Life, ran by a local family for 160k IDR, including a decent, tasty 2course breakfast. Pay a little more for aircon, and the rooms were immaculate. It was a great place to meet fellow travellers. There’s numerous noisy dorms on the island at around 100k for the young team with afternoon Bintang pool parties, or there’s a whole host of mid-to-high range accommodation scattered all over the island offering luxury spas, fine dining and private swimming pools for those who want to indulge.. a far cry from hippy-ville!

The island is now home to a whole host of hipster gaff: bakeries, gourmet pizza joints, boutique clothes shops & craft bottle shops and if you get bored on the island there’s a zillion agencies and their grannies willing to sell you boat parties, snorkel trips, dragon adventures or volcano climbing- all of which are no too bad given the feedback. Most people rated the quality and prices are pretty reasonable.

Finally, there’s now tourist police on the island. Historically Trawangan was self-policed by the chief of the Island and his committee – but, probably due to the sheer numbers of tourists, this has been handed over and there’s a police station right in front of the jetty. I’m not sure of the situation on the other islands though.

We took a 75000 Rupiah speedboat to Gilli Air to spend a few days. It’s much quieter than its big sister and a bit more couple orientated. However the bars take turns to host a party each night so there should be something should you wish to let loose your wild party flippers and boogie on the beach.

Gili Air still retains its charm and there’s a very laid back, chilled out vibe, with comical signs offering ‘very fucking fresh magic mushrooms’ and ‘skinny people are easy to kidnap, eat burgers’, although there’s an increasing number of guest houses, boutique hotels and high-end resorts creeping in at an alarming rate.

The flat rate to leave the islands seems to be 350k, (includes transfer to Kuta at the other end), regardless of the cost you paid to get there, unless you haven’t lost your return ticket in amongst pub receipts and snorkeling stickers. To redeem your return, you must find the office of the company you bought from. They are all situated along the beach front near the jetty and ask the locals, they’ll point you in right direction. You have to book at least one day in advance and there’s no guarantee they won’t be sold out. I decided to return early because of the tsunami warnings, and so ended up paying for a seat on another boat as my original return was booked out. You can’t get a refund so don’t even ask, they’ll not entertain it.

So I headed down to register my ticket half hour before scheduled leave and settled myself at the jetty to await the boat. I was issued a plastic lanyard and myself and my baggage green labeled disconcertingly like a tour-group factory product. The jetty was utter chaos. Hundreds of subdued, partied-out people looking confused in different coloured stickers.

Amidst the chaos however, they managed to load the boats with the designated passengers, albeit a 1-hour delay. Also, given the additional return stops of Meno, Air and Lombok, the journey took closer to 3 hours, with a few people kicking off. If you have a flight to catch, head back the day before to avoid the stress. At Padang Bai, the mayhem continued as we lost the the rep guiding us through the chaotic crowds to our particular minibus, and ended up at the wrong one a couple of times before finding our overbooked bus. It’s advisable to keep the wee stickers on till you’re in the bus as within the chaos someone somewhere knows what your colour means and will send you in the right direction.

Rush hour traffic meant that we reached Kuta Sky Garden (our drop off point despite being told we’d be dropped at our hotel) a good 7 hours from scheduled departure… just so you know. My pal wasn’t so lucky and was dropped in the middle of nowhere. Uber and Grab are good apps to use if that happens, just watch the local taxi mafia don’t catch you, they don’t like it. Some have resorted to fisty cuffs in the street with the Uber drivers over their patch.

Finally, respect the customs on the islands. The villagers are a Muslim community, and although beachwear is tolerated on the beach-front, cover up within the village and turn off your music during their call-to-prayer.