The Andaman & Nicobar Islands are an archipelago of around 300 mostly uninhabited islands in the Bay of Bengal, famous for their powder white sands, mangroves, lush rainforest and pristine coral reefs. Although geographically closer to Myanmar these islands are part of the Territory of India, with the exception of a few in the North, including the Coco Islands which do belong to Myanmar.

Most of the Islands are out of bounds for tourists with the exception of a few, of which the most popular are Havelock, Neil & Long Islands, however a special permit is required.  I flew firstly to the main town of Port Blair on one of the many daily, direct 2 hour flights from Chennai. Port Blair also receives regular flights from Calcutta and Delhi. Having missed my pre-booked flight I found it easy enough to secure a next morning departure at the airport with IndiGo Airlines. Spice and Jet also have direct flights to the islands.

The permit for the Islands, which I was told was to be carried on person at all times, is acquired relatively hassle-free from a small desk at the airport after completion of a rather long-winded form. From the airport I took a friendly tuk-tuk to the small travel agents in town to buy a ferry ticket and it’s worth mentioning that whilst I was successful, my fellow travellers who opted to go direct to the ticket office at the port discovered the ticket office to be shut for lunch between 12pm-1pm and subsequently missed the ferry.

There are a couple of companies, Green Ocean, which is the more rustic of the two, and Makruzz, which is an expensive, air-conditioned catamaran – they run different schedules. The cheapest option however is to travel with the local ferry company, again on its own schedule. As you can go up onto the deck with the 2 cheaper options then for me those were my favoured choices. The schedules are a bit confusing, the printed timetables on display were largely out of date and appeared to change monthly, and so it is best to ask when there.

It takes around 1.5 hours to reach the most popular island of Havelock. There are numerous stunning beaches

around the island to explore, which are rather systematically referenced by a number rather than their actual names. Of Beaches 1 to 7, Beach 3 isn’t actually a beach, but in-fact the small town centre of the island where can be found 2 ATMs (only one of which worked with my visa card), a supermarket, a fruit market and a jumble of small restaurant shacks. Further down the coast stretches Beach 5, a stunningly beautiful beach whereby a number of scuba resorts, upmarket hotels and basic backpacker bamboo huts are scattered off the main (single track) road down towards the beach.

It is apparent with the recent development of a number of large and very expensive resorts that the local government are targeting the wealthy, middle class Indian tourism market, and with the introduction of one-month permits and large price hikes are trying to distract the establishment of a budget backpacker scene. But whilst some of the beach chalets were on offer at around 15,000Rp/night, it was still possible to find basic cheap beach shacks for a fraction of the price, and very basic huts can be found from 600rp upwards.

Alcohol is scarce on the island, more-so on Neil Island than Havelock, as these aren’t party islands

and there is no nightlife, music or bars. The restaurants are mostly small, family run shacks, although some of the dive centres along the beach front of Beach 5 have introduced an element of hipster modern, selling European priced cakes and lattes. While a recent change in the licensing laws mean it is now technically illegal to sell alcohol within 500 metres of a road, a few of the large resorts do sell beer or spirits so long as they are hidden from view. However these tended to be, in my experience, very expensive, mostly un-chilled and super strength. There was one upstairs beer den we found on Havelock island at beach 5, selling reasonably priced (250rp) strong Premuim Kingfisher, or whisky, and although it was a bit rough and edgy, it was friendly enough establishment and we had a good time. 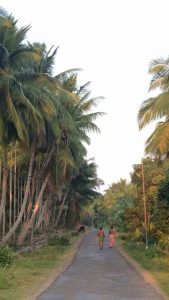 But these islands are mostly for peaceful relaxation and are beautiful to explore at a laid back pace. Powder-white soft sands, pristine coral reefs, dense tropical jungle and crocodile-lurking mangroves spread a rich carpet of colours across the island floor. Inland the rural life is slow-paced and heavenly; kids play on tricycles amongst mango, coconut and banana trees whilst ducklings and baby goats laze around amongst fruits drying in the sunshine.

On Havelock, we rented a scooter and explored the island in one day, stopping at beach 7 to swim

in turquoise waters (keeping a close eye for elusive crocodiles near the nearby swampy riverbank). There have been very occasional reports of attacks and there are signs up warning tourists to be careful, but no-one seemed particularly concerned so we figured we were safe enough. On our way back we stopped off to trek through the jungle, a 2km hike to Elephant Beach where these big creatures can be observed bathing in the sea. The trek itself can be taken without a guide and is really beautiful. We did take one wrong turning and enlisted the help of a very capable and professional 5 year-old tour-guide sent by his parents to show us the way. Elephant Beach closes at 3pm, and as it gets dark around 4.30-5pm on the Andaman Island, so it is wise not to hang around too much later as the jungle is a decent hike even in daylight.

The food on Havelock was mediocre. It consisted mostly of South Indian fare, dosa, idli, fish/veg curries. However, due to the remote nature of the island, most things were sparse and often most of the basic menu was not available. There were a few top-end restaurants selling Western dishes, pizza/pasta etc, with Western prices to match.

Travel to Neil Island from Havelock can be arranged through Macuzza (1200Rp) or Green Ocean (400Rp). I opted for Green Ocean which was a pleasant enough 1.5 hour journey. Your permit is necessary to purchase a ticket. Neil Island is more rural and picturesque than Havelock. A single track ‘main road’ runs through the 5 km island, joining together the numerous beaches. A few little shacks are dotted along the road selling crisps, biscuits and juice, along with the occasional roadside restaurant or bamboo beach hut. Neil Island was less expensive than Havelock, less developed, and very quiet and laid back. I hired a basic but clean beach hut for 1000Rp/night from Dream Garden, a tiny 3-bungalow and restaurant family run affair set in a beautiful garden rich with mango and coconut trees. We feasted on fresh mangos which dropped from the trees and supped lush fruit juices from the tiny restaurant. I was often the only person on any beach, which were stunningly tranquil. There was sadly a litter problem on a few of the beaches which could easily have been remedied by a regular clean-up.

We hired bicycles for 100rp/day and cycled around the island in one afternoon, soaking up the laid

back village atmosphere. Kids played on tricycles as goats and ducklings meandered through the lush green tropical backdrop. We stopped at Sunset beach to snorkel in search of the elusive Sea Cow, a famous and celebrated creature of the Andamans. The coral was thriving and there was plenty of colourful fish.

For nightlife, the Holiday Inn resort on beach 5 or the Sea Shell on beach 3 are the only places on the island selling alcohol when we were there, and shut around 9pm. However I have since heard that there

was a Hindu festival during my visit which was prohibiting the sale of alcohol and so perhaps outwith this time it may not have been so restrictive.

To leave the island, an application form along with a copy of the permit is required. I chose the local ferry to return to Port Blair – tickets are issued on a first-come-first-serve basis, from 6.30am for the 8.30am departure. Everyone, however, was issued a ticket for the crossing. The Xerox shop was closed, however the dive centre at the jetty was open and issued photocopies for 20rp/page. The dive centre also provided an ok Wi-Fi connection for a fee. To check out some of the beautiful clothes and crafts sourced during our travels, please click here.

Our Journey Blog
Recent Comments
Archives
About This Site
Back in 2007, dissilusioned with the rat race, we decided to pack it all in, sell our possessions and buy one-way tickets to Asia, where we begun an exciting new adventure exploring new worlds, cultures, music and nature. Fascinated by the diversity and skills we saw as we wandered through endless markets, souks and streetstalls, we formed an idea to set up a small business importing some of these ethical and fairly traded items into Scotland.
Find Us